The directive was sent from on high, “We need an newspaper ad for the Poughkeepsie Journal to promote our stores’ expansions and we need it by 12 noon today.”

First I thought, “yea right”, then I mused a sobering refrain, “or it’s the hoosegow for you.”  It sounded like a typical Monday with four days left.

The newspaper ad design would have to focus on the two store expansions that Mother Earth Storehouse had just completed.  It had to appeal to their demographic, which in this case is overwhelmingly female. I could take the literal approach and show a great expanse of new shopping aisles and products. Though the advertising space reserved was way too small (8 column inches: 2 columns x 4″ height) to adequately translate the enormity of the added space.

Ah, how fun is this: a minuscule ad to promote a huge expansion of retail space. And it all has to come to fruition in 2 hours. As an ad designer, the subsequent narrative represents the peculiar creative processes which followed.

My predicament was one that a graphic designer finds himself in frequently. Impossible deadlines, creative blocks and seemingly insurmountable tasks are just part and parcel of the advertising shtick. So the story begins.

If you grew up in New York during the sixties and seventies you’d remember “Ant Hill Harry alias Baby-Face Finster”  as the cigar smoking pint-sized bank robber that the “Bugs” teased and tormented in a his usually sadistic way. My mind traveled twenty (well, alright thirty) years prior to retrieve this peculiar image of a frustrated puny thug who squeezed himself into the shape of an ill-fitted “bundle of joy”. Bugs found Baby Finster at his door step and quickly discovered that the toddler was actually a tattooed crook on the lam. Like Finster, I was frustrated by the dilemma I found himself  in on this Monday morning.

He was certain that eventually he would be back on “easy-street”, enjoying the fruits of his labor while smoking a big Cubano.

You may ask yourself, “What in the world does a brutish cartoon character have to do with the expansion of a retail grocer? “. Well I’m not sure. Let’s continue with the self-psychological exploration into creative thought processes.

Without the luxury of several days to work through some rough  ideas, I sought inspiration online. Thanks to Google’s huge image index, researching words to help visualize creative ideas has become much faster.  I began to search for keywords and terms like “baby”, “baby cracked” and “baby egg”.

What I found were some very intriguing images, including illustrations and photos that got my proverbial “creative juices flowing” .

After some time the visuals for the newspaper ad concept materialized. Since the advertising space was small and the focus was large, what better way to equate the two with an egg. 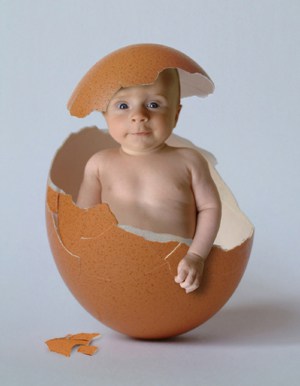 The small confines of an egg being cracked open by a growing baby inside seemed a perfect fit. What a better way to illustrate the juxtaposing elements of space. And, need I mention that a cute infant is bound to grab my target audience? With risk of sounding too simplistic, babies and puppies always attracts the attention of the more empathetic sex.

An ad designer with a peculiar idea, inspired by an old cartoon, creates an effective  newspaper advertisement.

Next step, make my ad design concept a reality. This is where the rubber meets the road. A great idea is important for an effective ad campaign, though executing those ideas successfully into an appealing ad  is essential. With a bit of Photoshop ingenuity and 20 years experience illustrating for advertisements, the stock image of a cute baby emerging from a cracked egg became a little construction worker breaking free of his restrictive enclosure.